Latin’s 2019 upper school fall play, “She Kills Monsters” by Qui Nguyen, is an energetic comedic drama set in a fictional high school in the 1990s and a special-effects-laden fantasy world within the role-playing game Dungeons and Dragons.

The play is filled with ogres, killer fairies, evil cheerleaders and even a flesh-eating Jell-O mold! This ambitious piece presented numerous design and technical challenges. Over the summer, Director Nick Baer and performing arts faculty designers, along with guest costume designer Gaby Kuhn, collaborated to create the look and feel of the show, beginning by sharing a variety of ’90s era research images: D&D figurines and packaging, stills from MTV shows, album cover art and layouts from Ray Gun magazine, to name a few. With support from Latin’s Performing Arts Endowment, additional guest artists were brought in to assist with the effort. Mask and puppet maker David Knezz taught sculpting and papier-mâché techniques, helping the cast create their own masks for several fantasy characters. Fight choreographers Dave Gonzalez and Nicky Jasper were integral in developing the dramatic final sequence of the play, in which a five-headed dragon, operated by student puppeteers in the balcony, swoops in over the heads of the audience to do battle with the play’s hero.

The fall semester stagecraft class was tasked with developing many of the effects and specialty costume pieces from the play.

Students worked in groups to research techniques, gather resources and collaborate with faculty and guest artists. One group created the Beholder, a grotesque giant eyeball that appears for a short but memorably hilarious moment. Another group created the five dragon puppets, working with Knezz through multiple iterations of sculpting techniques for the heads, as well as engineering puppeteering poles up to 22 feet long that were lightweight, yet nimble and durable enough to be operated safely above the audience. Another group created a giant cube of green Jell-O, using PVC pipes, pool noodles, and translucent plastic strips that could “swallow” a character whole. The last group created blood and gore effects, concocting gallons of “blood” from corn syrup, chocolate sauce and laundry detergent. This group also worked closely with Kuhn building fake arms that could be dramatically ripped off a character during each performance. Many of the particular requirements for these projects evolved as fights, blocking and concepts were refined in rehearsal. Through this process, stagecraft students learned the value of frequent, detailed communication with members of the production team and cast. 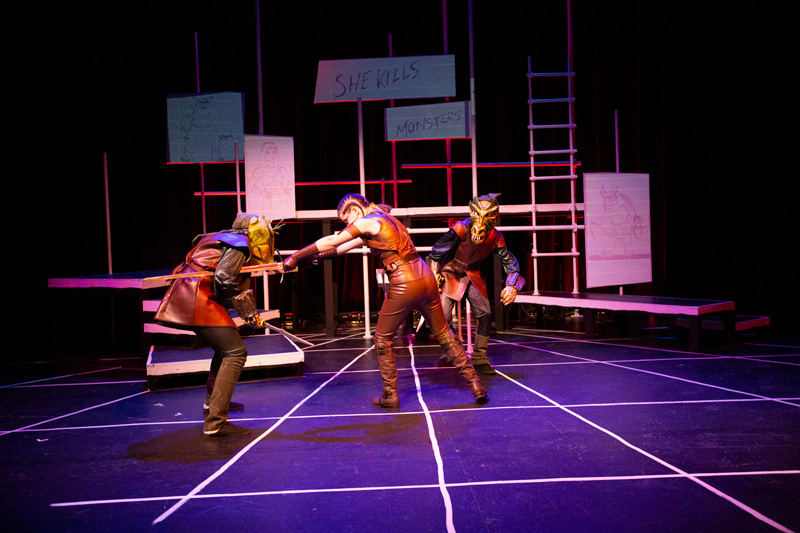 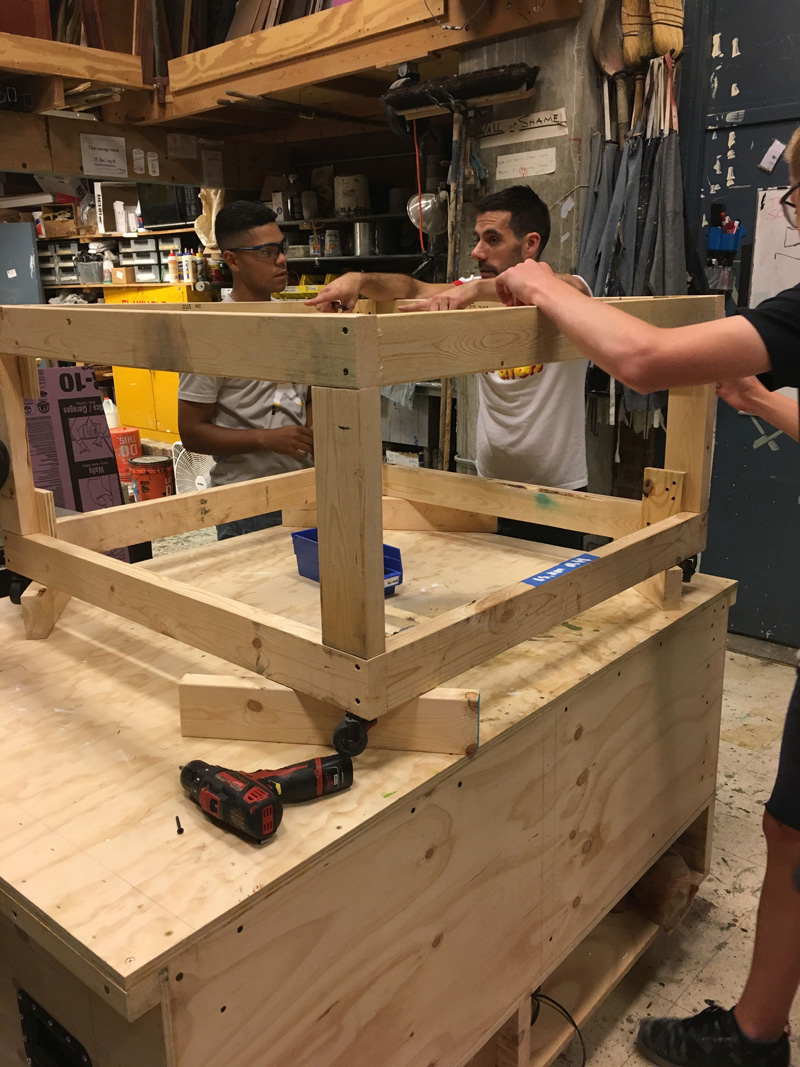 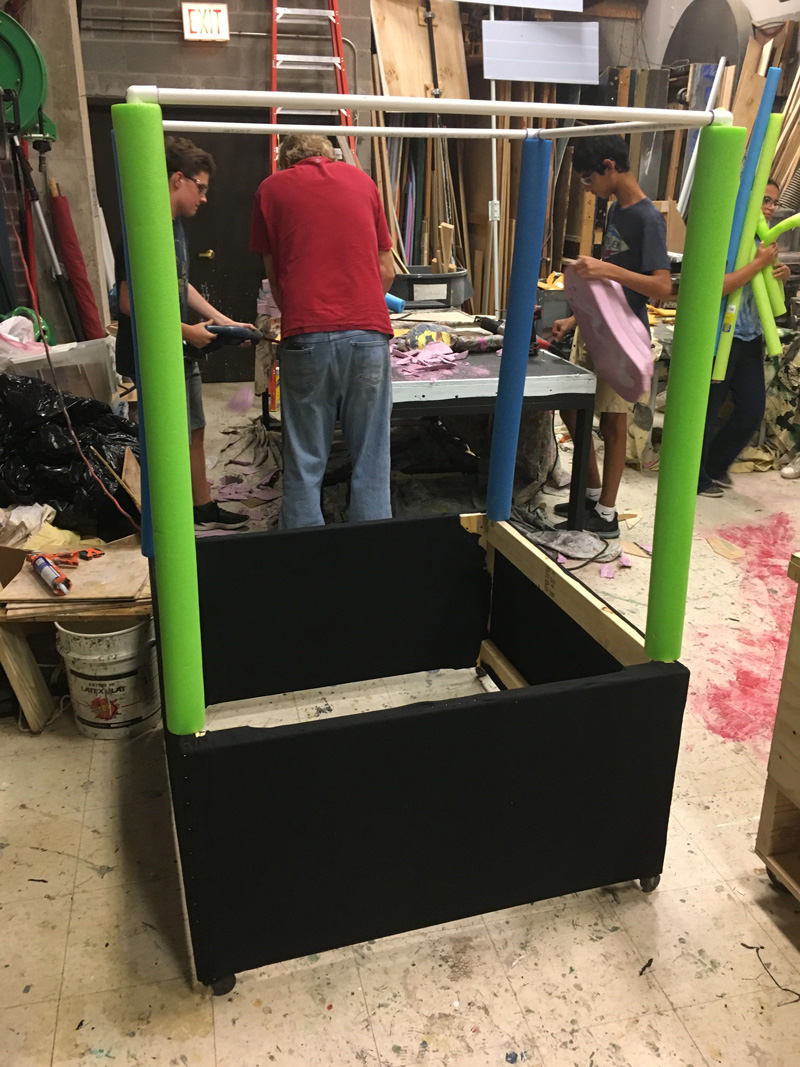 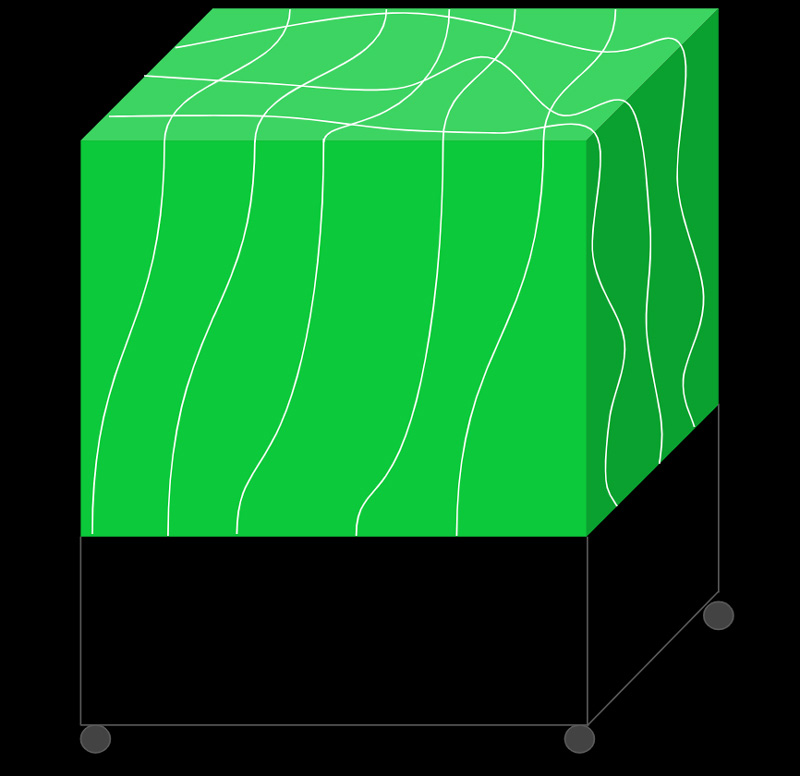 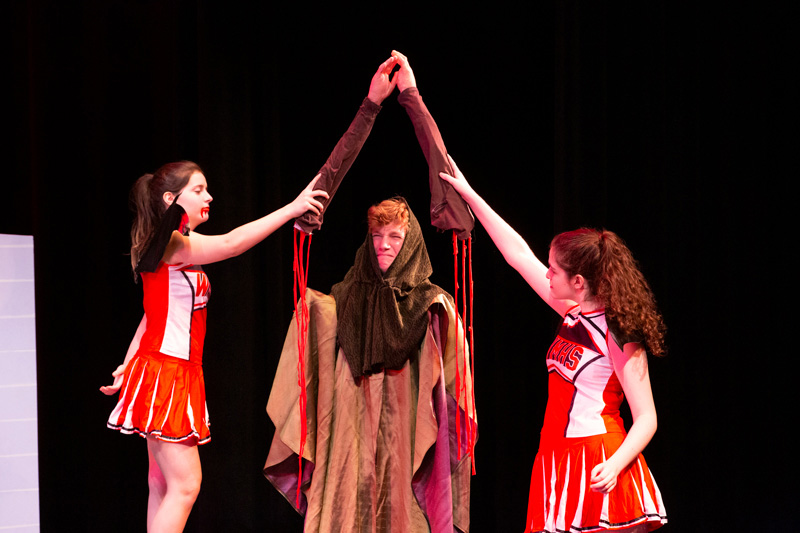 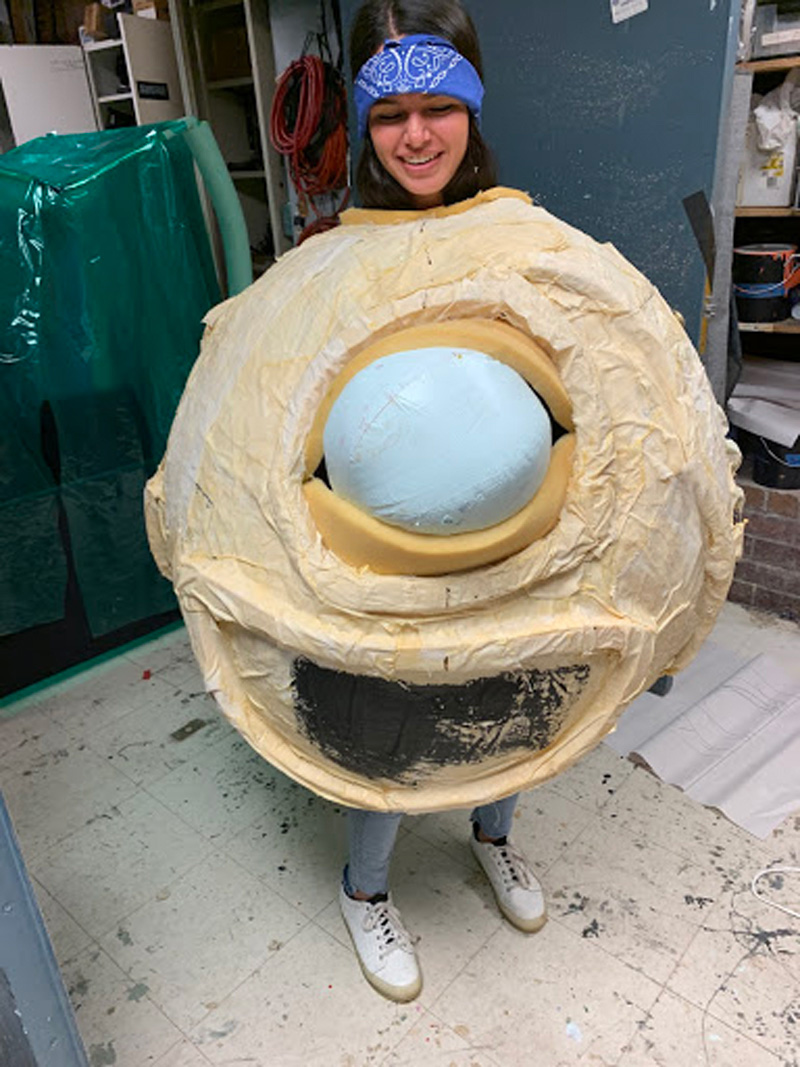 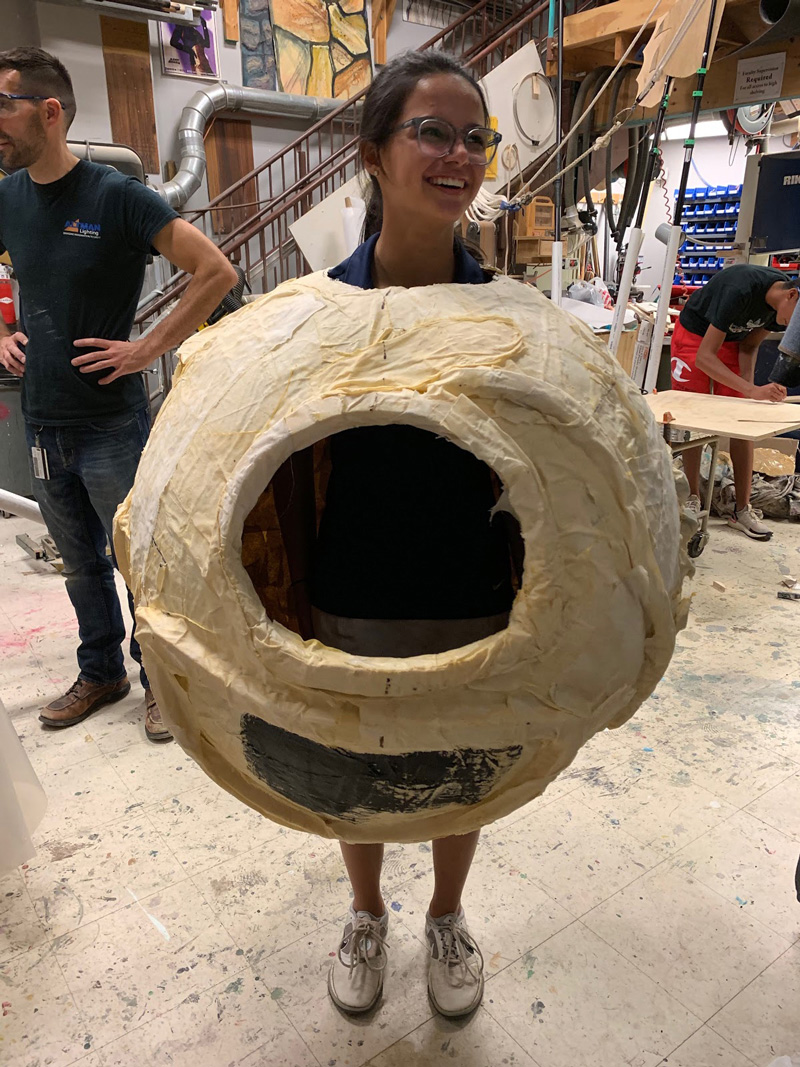 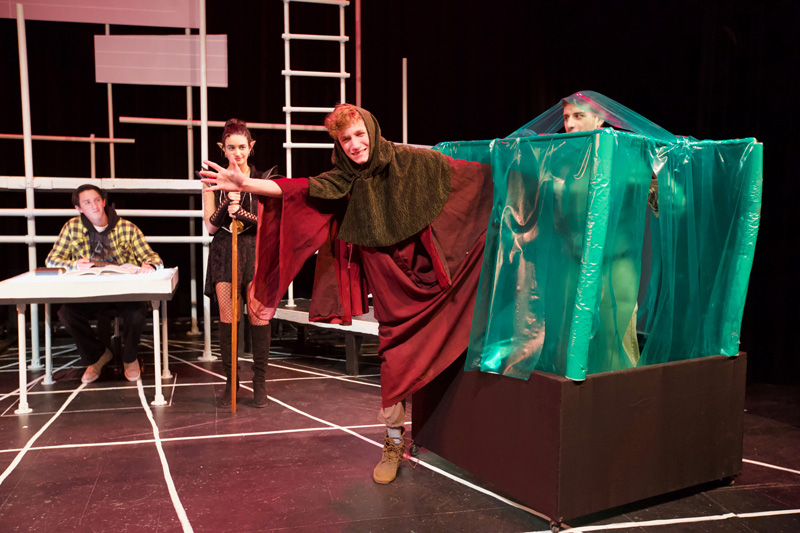 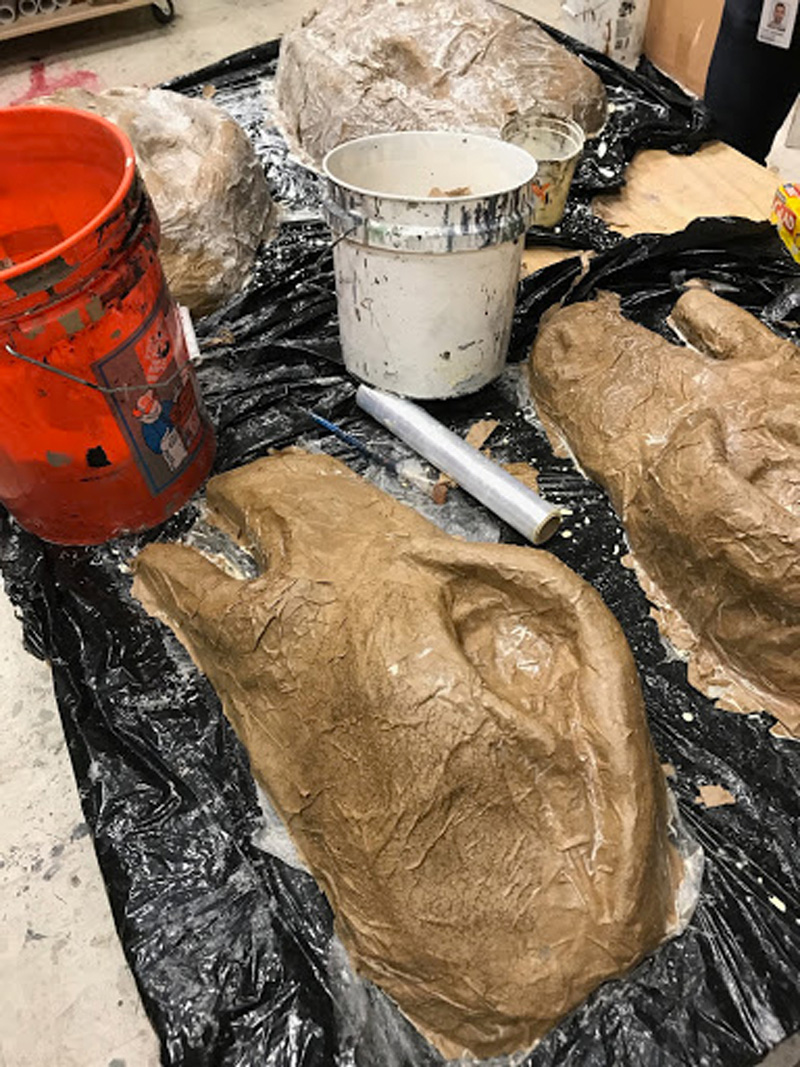 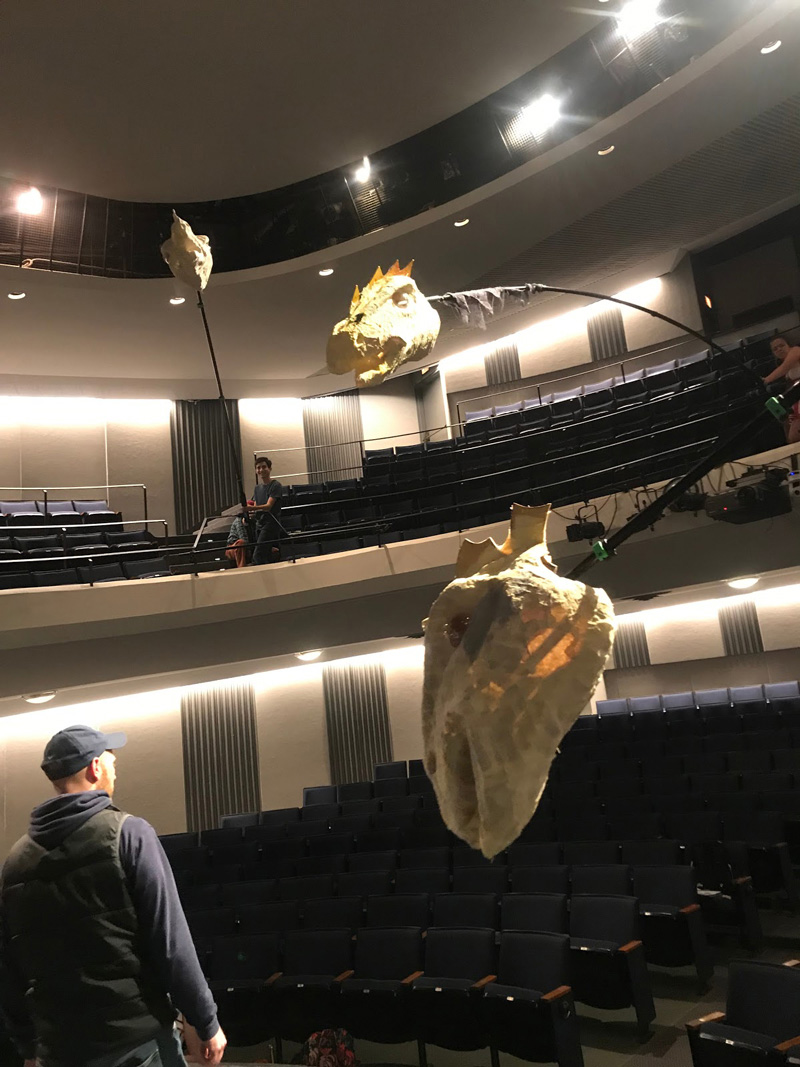 “[A gallery display] gave the Latin community the chance to see the extensive creative and technical work from students, faculty and guest artists…”

At the end of the semester, a group of stagecraft students created a gallery display of artifacts and documentation from the play. They gathered production photos, original design drawings, props and costume pieces, displaying them paired with labels and descriptions to tell the story of the “behind the scenes” production process. This display gave the Latin community the chance to see the extensive creative and technical work from students, faculty and guest artists that goes into putting on a visually compelling theatrical production on the Latin stage.